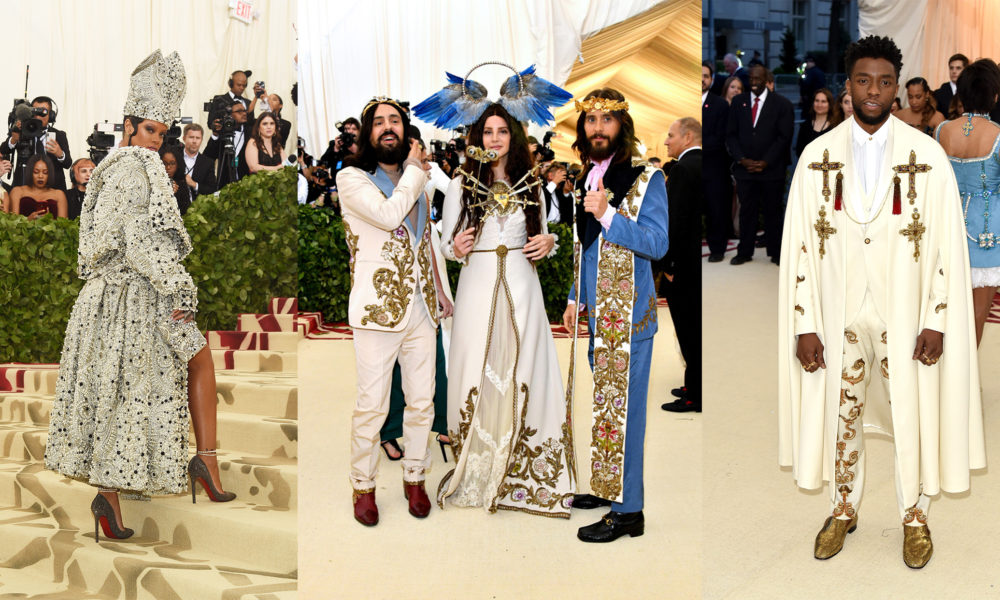 Like every year, the Met Gala is one of the most anticipated events in the fashion industry. Known as the “oscars of fashion”, the most  iconic celebrities gathered at the Metropolitan Museum of New York to wear beautiful high fashion costumes always following a theme. This year, the famous celebration had as theme “Heavenly bodies: fashion and Catholic imagination” and among the guests who attended were Rihanna, SZA, Madonna, Lana del Rey, Jared Leto, and others.

The celebrities wore costumes inspired by the Catholic religion and showed their best poses to the cameras. In this article, we show you our favorites:

The singer caught the attention and stole the show to appear as a true angel fallen from the sky wearing a set of Versace. Katy’s outfit was one of the most striking and extravagant of the night. Fun Fact: The feathers of the attire were painted one by one by the Italian house. 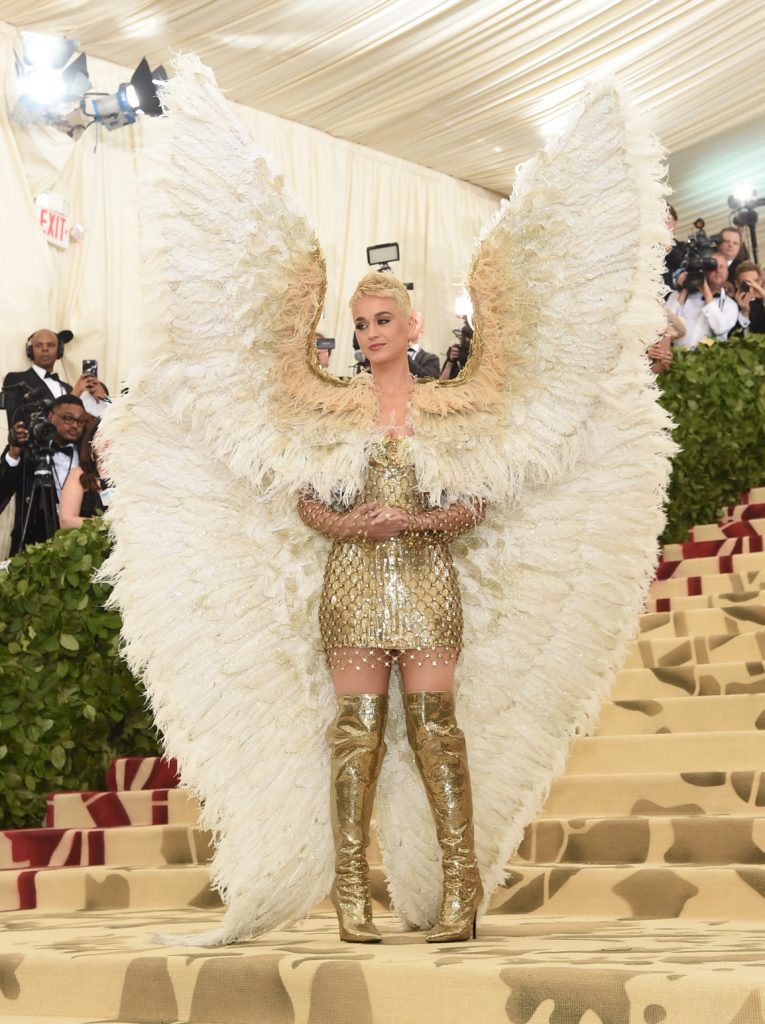 The actress wore a beautiful turquoise blue dress with tail of golden details made by the designer Prabal Gurung. To complement this attire, she wore accessories on the face as a veil with metal ornaments that reminds us of a very celestial entity. 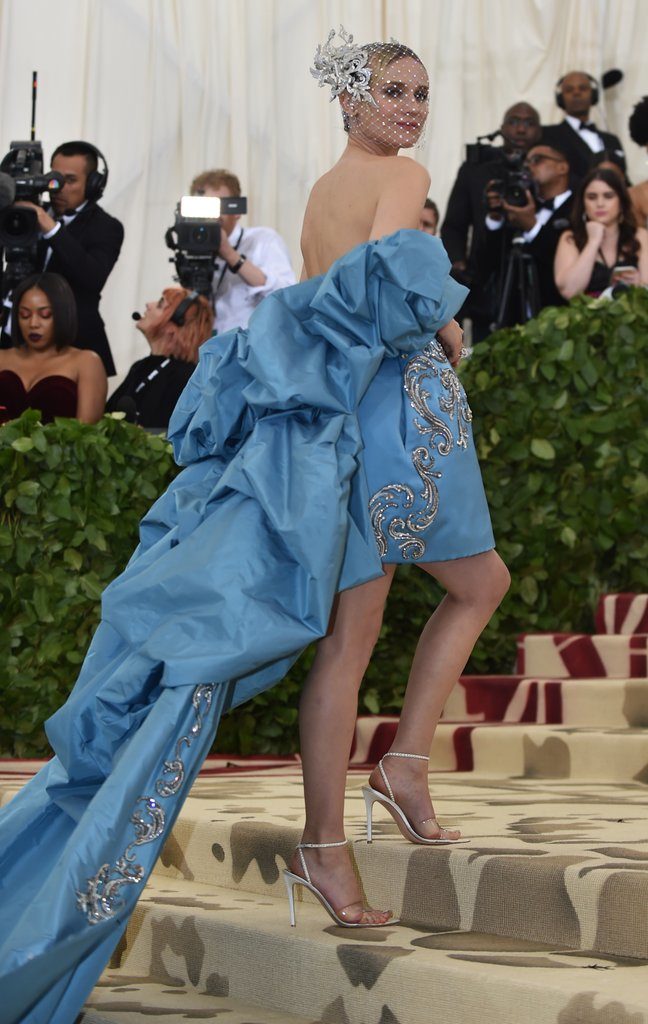 Grande spent his first night at the Met Gala using an original design by Vera Wang. The dress had a print of the Sistine Chapel where we can see “The Last Judgment”, the iconic work of Miguel Angel. Ariana posed for the cameras fresh and smiling; accompanied his journey with a characteristic tie that covered all his suit. 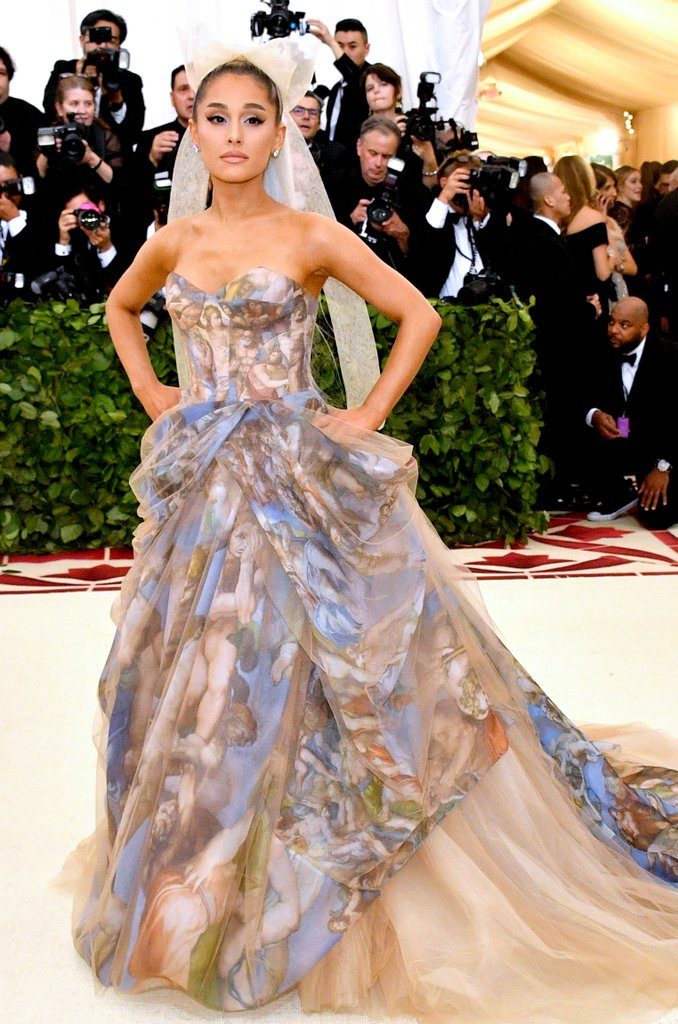 One of the most awaited stars of the night for his close connection to religion throughout his artistic career. The queen of pop wore a large dress by Jean Paul Gaultier, referring to the Gothic style of the church and which she accompanied with a crown full of crucifixes and a bouquet of black roses. At the end of the event, he made an artistic appearance where he played several of his songs, including her iconic hit, Like a Prayer. 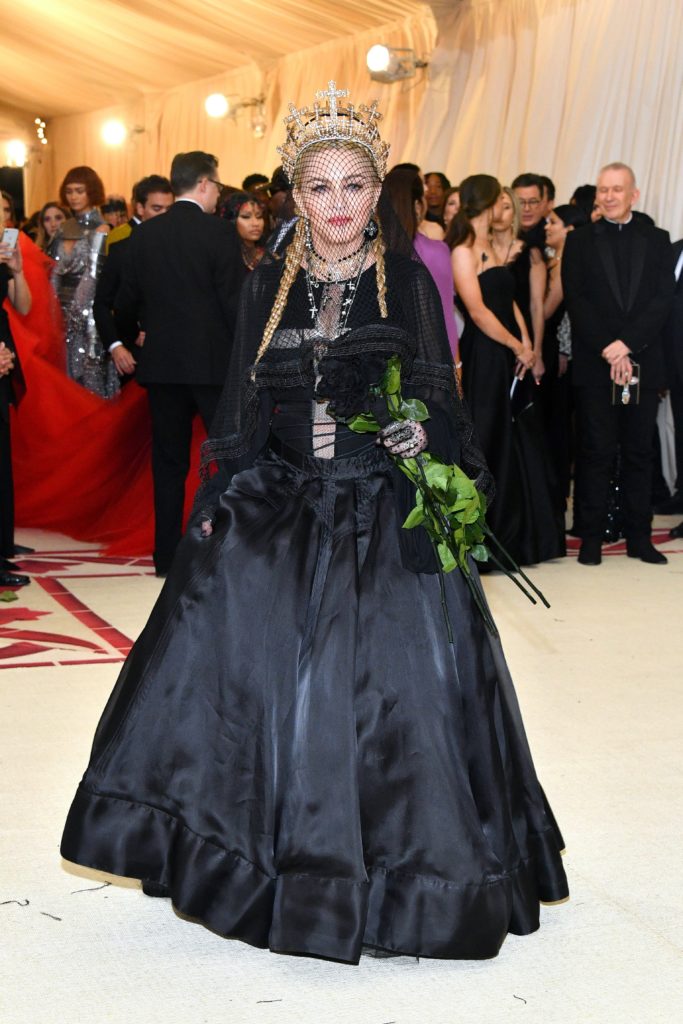 The first man on the list. It is the third time that the singer attends the Met Gala and decided to take a low profile, although he followed the theme in a subtle and original way. Dress of a black tuxido with details of golden threads of the hand of Dolce & Gabanna and accompanying it with a small crucifix. Nick Jonas walked around the red carpet cool and comfortable, so much so that he came to the event in the New York subway. 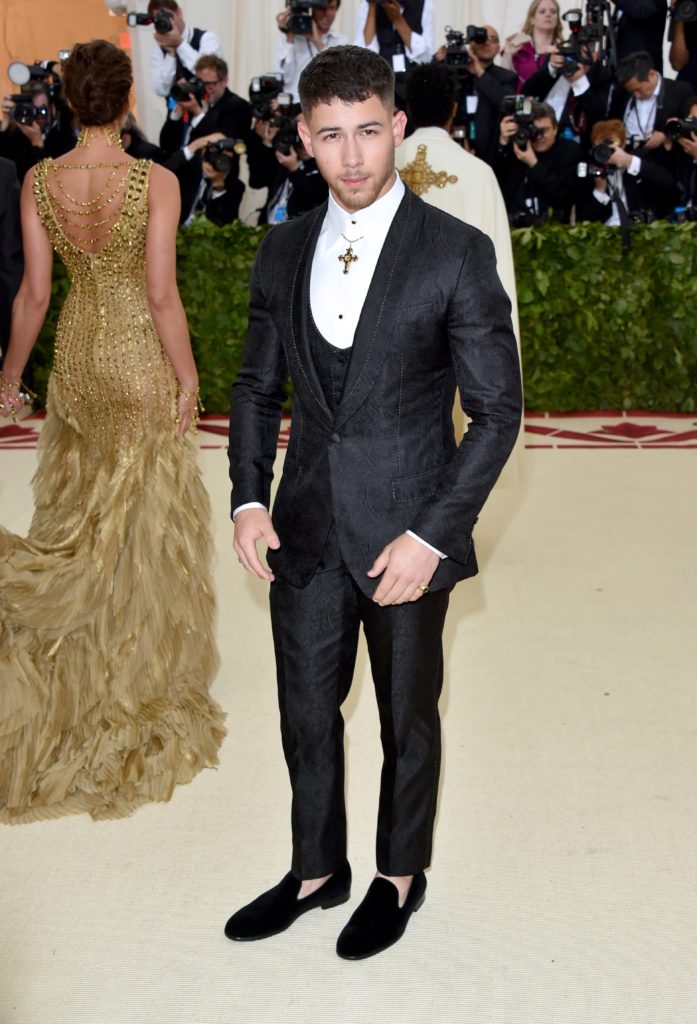 Another Victoria’s Secret model on the list. The actress perfectly balanced the theme of the gala and the haute couture. Rosie posed in front of the cameras in a low-cut gold dress signed by Ralph Lauren fashion house. To integrate the concept of religion, she used a golden aura in a subtle way that crowned her as one of the queens of the night. 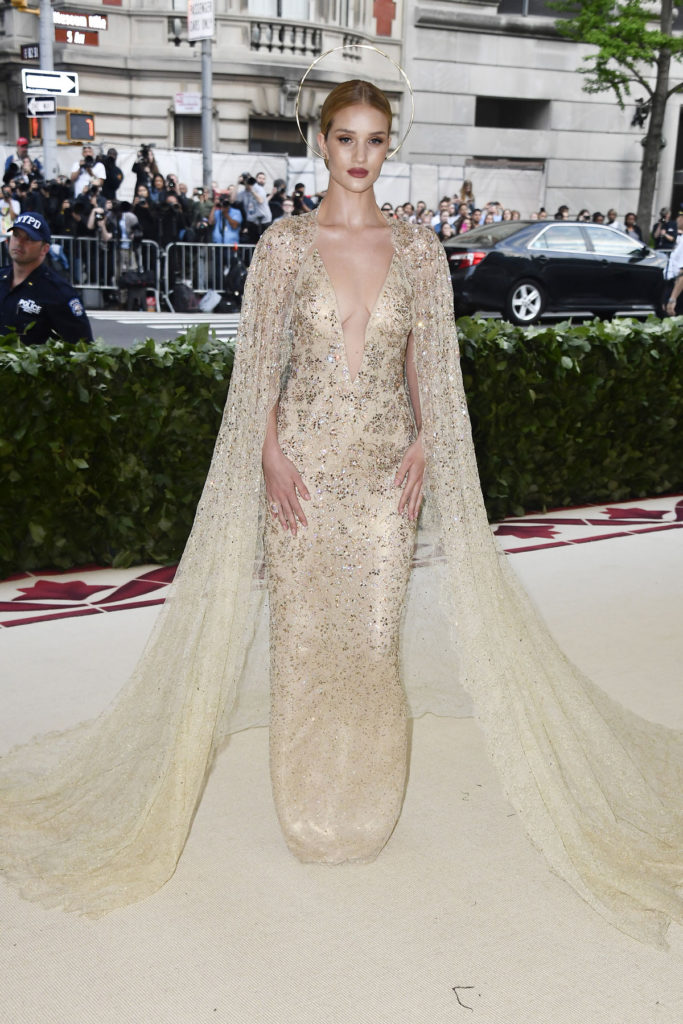 Lily Colins is one of the celebrities who has attended more years at the Met Gala and this time has not disappointed with her costume that has followed the religious theme. The actress wore a Givenchy dress that reminded the Virgin of Sorrows in a black cloak. What caught her attention was her detailed makeup that highlighted the porcelain skin and tears of the Virgin. 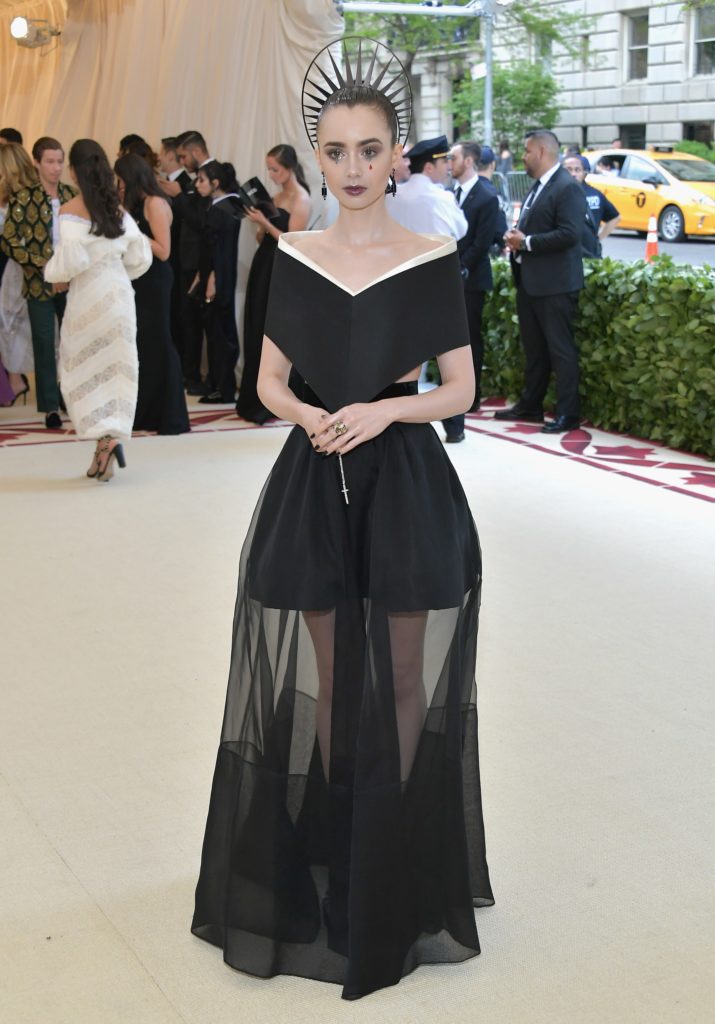 This has been the year of the new rapper and was one of the most anticipated guests of the night. Cardi B left the red carpet open-mouthed when she arrived in an extravagant Moschino outfit that he accompanied with a spectacular tail and crown; all inlaid with pearls. Despite being several months pregnant, the rapper knew how to choose the perfect outfit for the occasion and she was happy in front of the flashes. 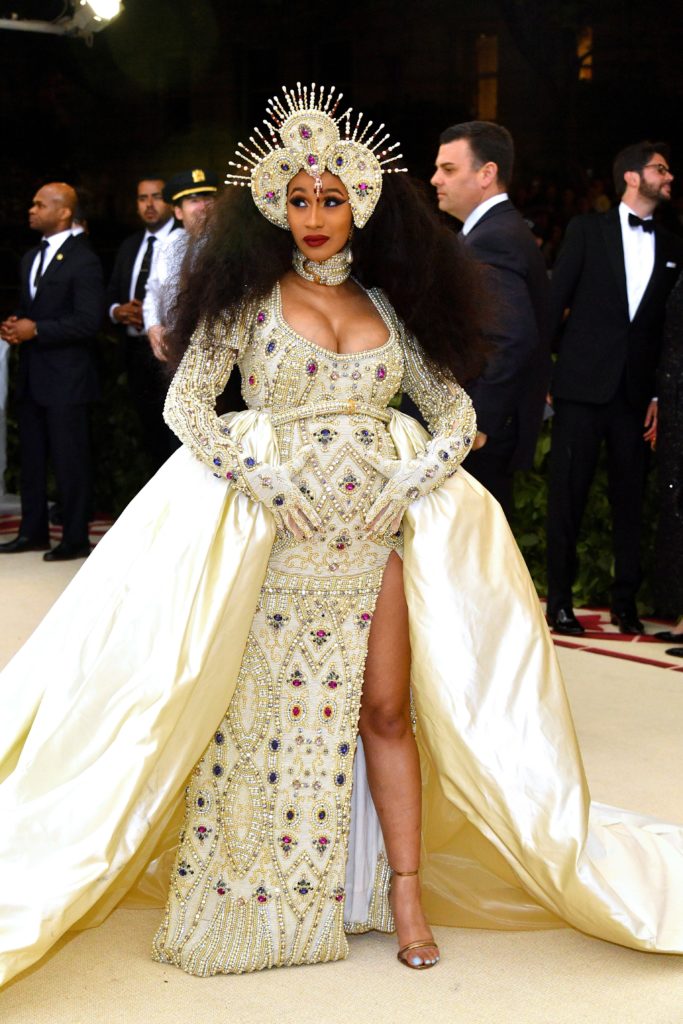 The contemporary singer received her first Met Gala in the best way. SZA wore a pink Versace dress with a princess cut that looked like something out of a fantasy movie. Adorned by a golden aura of great size and a splendid make-up, SZA stole the sighs of paparazzi as she passed through the red carpet. 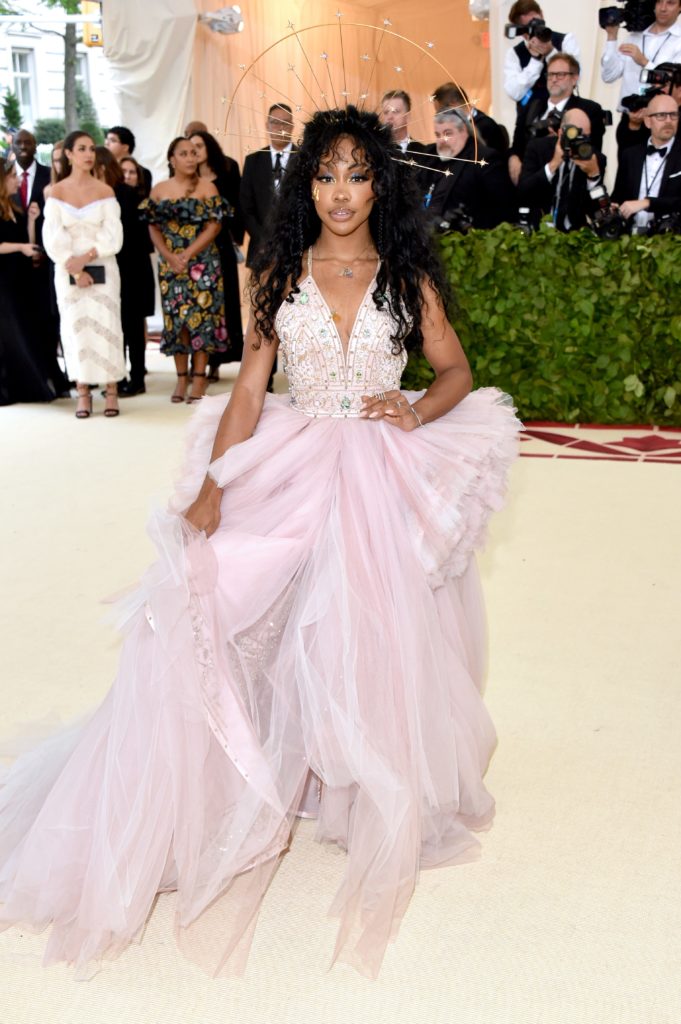 They have been crowned by critics as the holy trinity of the Met Gala. The trio used a set of Gucci that impressed everyone present. Alessandro wore a white tuxedo with golden details that represented the Father. Jared Leto also wore a tuxedo, but more baroque and with more details than the designer; the beard and the golden crown that simulated thorns helped him to represent the Son. Lana del Rey wore a suit that recalled a Virgin of Sorrows with swords that crossed a heart placed in the neckline of the dress, but the birds that perched on the halo of her head represented the Spirit. Undoubtedly, a very original trio that critics have named best group outfit. 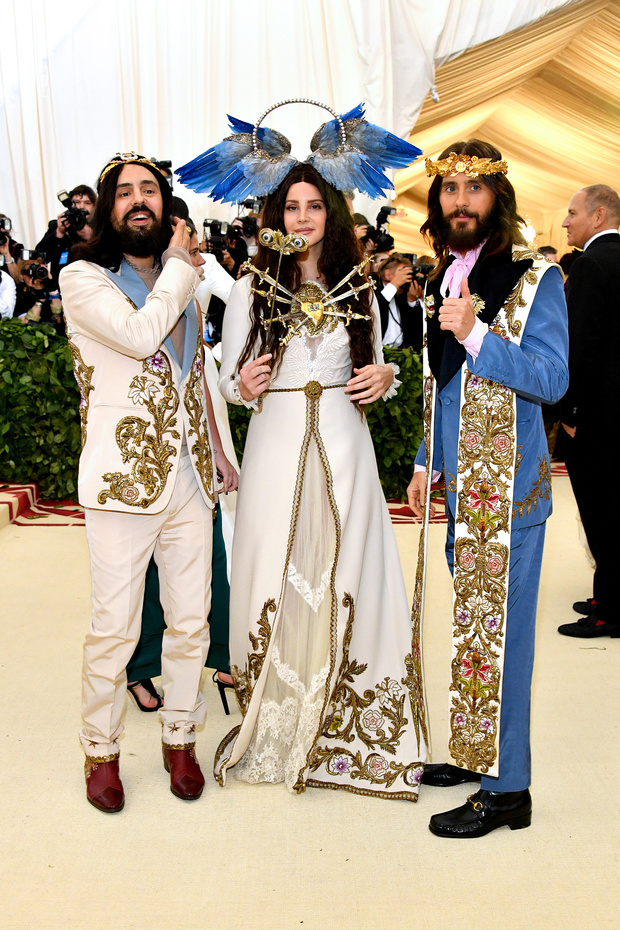 She was one of the first to arrive at the event and only with seeing her we all knew that her outfit was going to be difficult to overcome. Kate represented a modern virgin with an Oscar de la Renta golden dress with gold details that she accompanied with a veil of pearls and a large tail. What impressed her most about her presentation was her realistic makeup that created the illusion that Kate was a very religious sculpture. Undoubtedly, one of the best looks that the gala had. 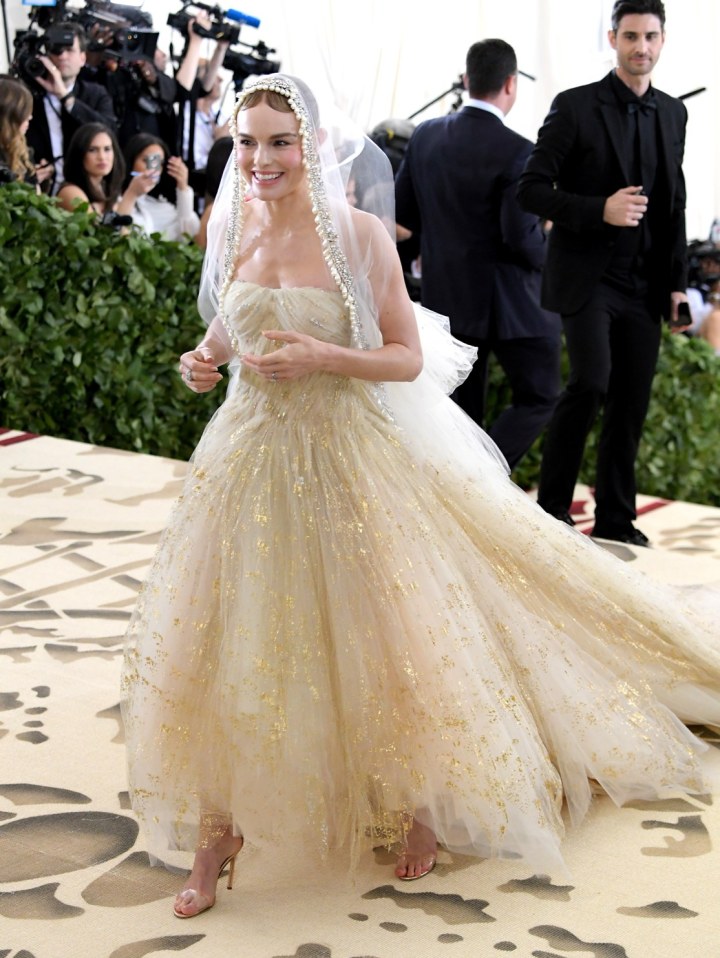 The actor who participated in the movie Black Panther was undoubtedly the best dressed man of the night. Boseman wore a Versace outfit accompanied by an ivory cape with large crucifixes, he was one of the few men assistants who followed the theme of the gala in an original and creative way. Without doubt, Chadwick showed to all male assistants that fashion can also be fun and that it is good to take risks. 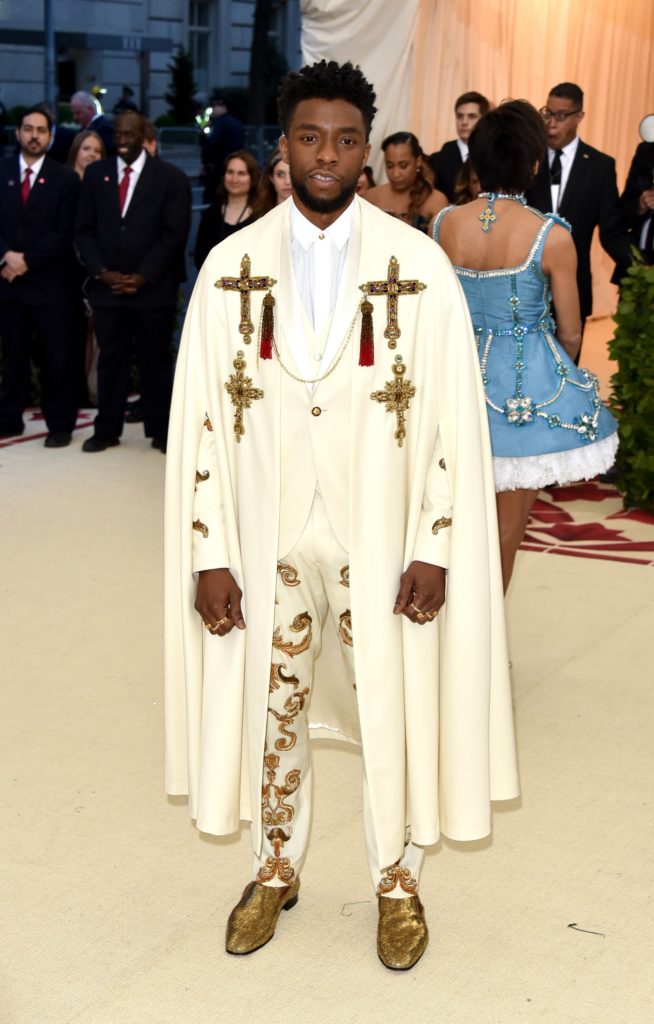 No doubt Rihanna is one of the celebrities who never disappoints with her outfits at the Met Gala. The singer from Barbados came to the red carpet dressed in an amazing outfit designed by John Galiano for Maison Margiela that resembles the papal costume, but much more extravagant and inlaid with gems and pearls that made her shine all over the gala. Social networks exploded to see his ostentatious dress, but like his suit, his arrival was spectacular; Riri arrived in a popemobile, an entrance worthy of a celebrity of such high caliber. 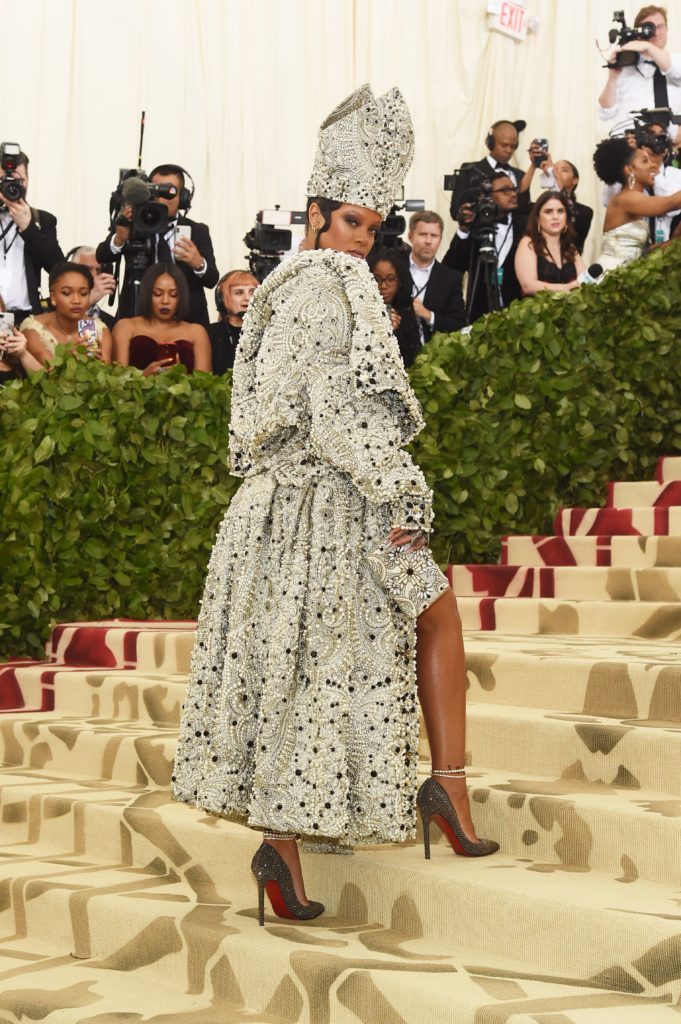 The fashion icon of this generation left all the guests speechless when she appeared at the Met Gala. On this occasion, the actress followed the theme of the gala explicitly, but she did it in an original and creative way representing Joan of Arc with her attire. The designer in charge of this dress, Law Roach, indicated that the inspiration for his suit came to light after a dream; after thinking of powerful women with a strong relationship with the church, he dreamed of Joan of Arc and upon awakening immediately called Versace to coordinate the costumes. 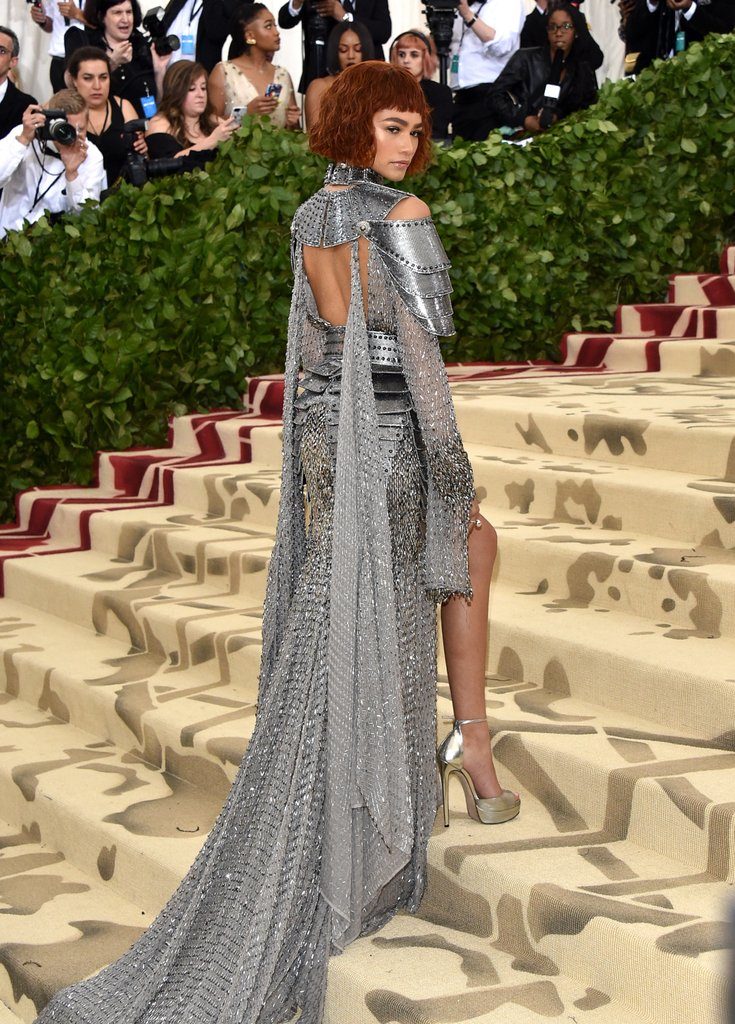 OUR # 1: BLAKE LIVELY
One of the infallible celebrities in the Met gala in recent years. For this occasion, the actress of Gossip Girl decided to use a ruby ​​dress of Versace with gold embroidery and accompany it with a halo in her hairstyle. To make the dress, Versace’s workers took more than 600 hours to complete the details. As accessories, Lively used Lorraine Schwartz jewelry valued at more than 2 million dollars. Undoubtedly, this was Blake’s night and has been named by many critics as the best dressed of the night. 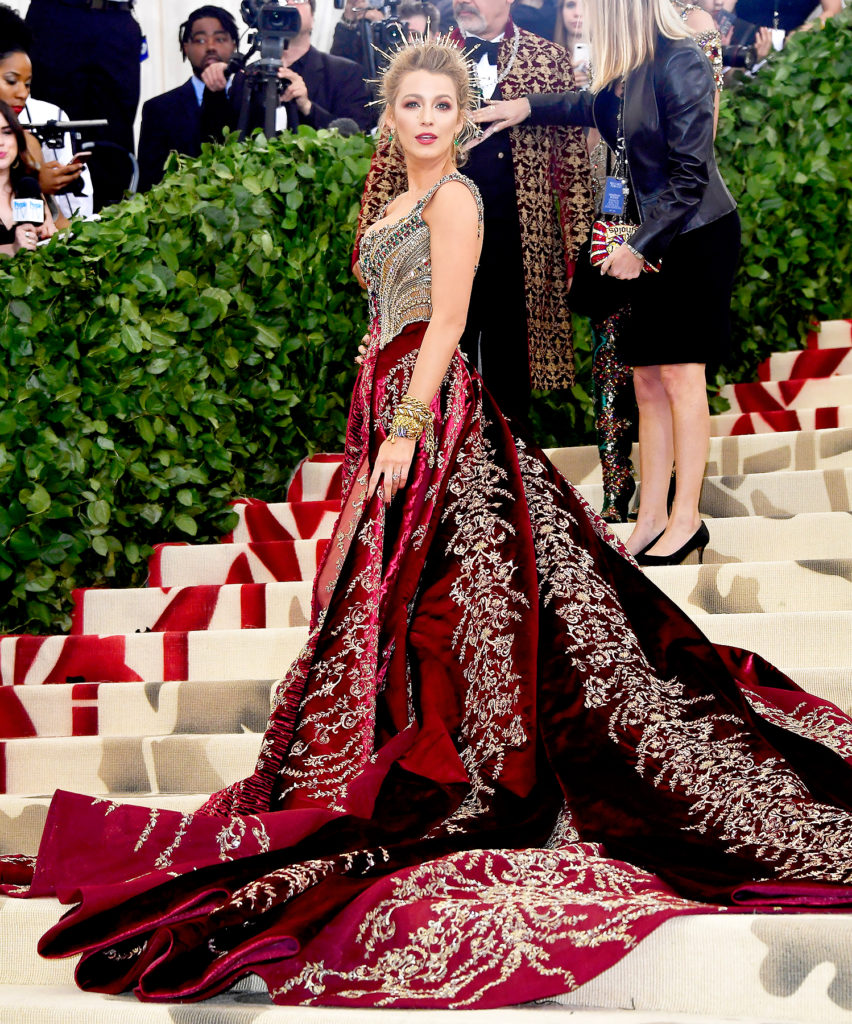 Here is a video of Lively’s preparation for the Met Gala day:

Mental Health: How to identify and prevent a potential suicide?
Hispanas, technology leaders
https://genteinternacional.com/en/met-gala-15-best-outfits/
To Top